Today the His Little Feet team went
to the Grand Canyon.  It was a beautiful
day full of fun, excitement and awe as the children experienced the views of
the Grand Canyon from the South Rim.

As soon as the team pulled into the
park, a map was handed to each of them.
The children went right to the animal pictures on the map and they began
to talk to one another about if there were going to see mountain lions.
One of the first questions the
children had was, “Which is deeper: the Grand Canyon or the Pacific Ocean?”
They learned that the Pacific Ocean is deeper than the Grand Canyon. The Grand
Canyon has a depth of 1,800 meters and the Pacific Ocean has a depth of 10,911
meters. They couldn’t believe that the ocean was so deep.
The entire team hiked down the Grand
Canyon trail for about an hour. It was an unforgettable hike. Inside the Grand
Canyon the children sang out at the top of their lungs, “The heavens declare Your
greatness, the oceans cry out to You, the mountains they bow down before You,
so I’ll join with the earth and I’ll give my praise to You!”
As Tariku looked out over the Grand
Canyon he asked, “God made that?”
Tsion exclaimed “It is so beautiful,
but actually no words can even explain it.” 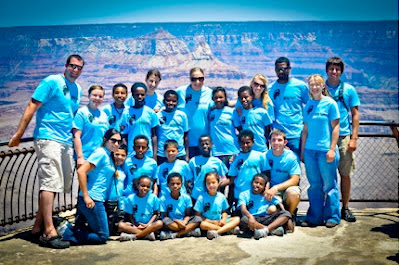